Press Statement on Dropped Charges Against 13 Defendants for MDEQ Arrests

MICHIGAN – Members of the Michigan Poor People’s Campaign (PPC) celebrated their latest legal victory by continuing to push for changes that prompted them to put their bodies on the line in the first place. In a press conference, they and their legal counsel detailed the group’s nonviolent civil disobedience at the Michigan Department of Environmental Quality (now the Department of Environment, Great Lakes and Energy or EGLE). They also noted that the Ingham County prosecutor dropped all charges against 13 activists “in the interest of justice.”

“The prosecutor in Ingham County dropped charges against all 13 members of the MI Poor People’s Campaign who last Spring were part of 40 days of action,” said Sylvia Orduño of the Michigan Poor People’s Campaign and Michigan Welfare Rights Organization.“ The problems the group was protesting—MDEQ’s roles the in the Flint Water Poisoning, the oil spill threat of Enbridge’s Line 5, permitting the massive waste treatment expansion by US Ecology, and Nestlé’s exploitation of the Great Lakes — were all far worse than nonviolent action by those arrested.”

This latest legal victory follows Michigan PPC members being found not guilty by a Detroit jury a few months ago and a three-year legal ordeal, prior to the PPC, when the City of Detroit dropped charges against the “Homrich 9” for protecting Detroit families by blocking water shutoff trucks. In all cases, defendants asserted the “necessity defense,” proclaiming their nonviolent actions were justified by the harm caused to families by bad state department and corporate policies and practices.

“The MDEQ, now the Michigan Department of Environment and the Great Lakes and Energy, needs to be sure to change more than its name. It needs to change its priorities and the way it operates,” said Rev. Bill Wylie Kellermann of the Michigan Poor People’s Campaign. “It’s obvious that the old MDEQ needed to make public health the priority, not corporate profit. The poisoning of Flint, the oil spill threat from Enbridge’s Line 5, and Detroit’s Georgia Street Collective having to defend themselves against the massive expansion of the US Ecology waste facility are all problems powered by greed.”

Read more Defendants statements
ALANA ALPERT, Rabbi, Director Detroit Jews for Justice; Congregation T’chiyah, Detroit, MI.
“Being a faith leader today means not just caring for our congregants and neighbors through personal joys and sorrows, but standing alongside them -- and for them if they can't. Our congregants and neighbors need clean, affordable water -- we all do. I'm honored to have had the opportunity to practice this kind of moral leadership with such an amazing group of spiritual warriors.”

DEB HANSEN, Reverend, Chaplain, Board Member, Michigan Interfaith Power & Light; Spokesperson, Concerned Citizens of Cheboygan and Emmet County, Levering, MI
“The threat to the Great Lakes from Enbridge's Line 5 is understood, the connection to climate is not.  Climate breakdown is a global undeclared state of emergency that may put our kids on the endangered species list. To enable a tunnel under the Straits of Mackinac, a massive investment in a dirty energy past, is perverse. The solution is clear: #shutdownline5  #cleanenergyNOW!!!”

S. BAXTER JONES, Collective for Disability Justice, Michigan Democratic Party Disability Caucus, Brain Injury Association of Michigan, Detroit, MI.
“Environmental Ableism discriminates against People With Disabilities (PWD) just as environmental racism discriminates against people of color. The increase in chronic conditions, such as autoimmune impairments among people who were formerly abled and the worsening of pre-existing conditions, can be directly attributed to the environmental harm and devastation caused by unregulated corporate greed. I hope that my participation in this act of nonviolent moral fusion will shine a light on the often forgotten or ignored community of PWD. Our society, its government, and its safety nets have a a duty and a responsibility to protect and provide for its most vulnerable citizens, and to uphold our Constitutional, Civil and Human Rights.”

RICHARD LEVEY, President, Shiffman Foundation, Detroit, MI.
“Our peaceful protest on June 4, 2018 was intended to call attention to the years of Michigan Department of Environment Quality actions which valued corporate profits over people. By wrapping the MI-DEQ in crime scene tape we called for OUR government to fully live up to its mission and to put the sanctity of the environment now and forever first. I do not want to waste precious time prosecuting MI-DEQ for past wrongdoing as much as I want to celebrate their PEOPLE over profits actions going forward.”

SYLVIA ORDUÑO, Organizer, Michigan Welfare Rights Organization, Detroit.
“Pursuing our right to present a necessity defense before a jury of our peers was always about ensuring that residents of this state have an opportunity to hear about MI DEQ’s malfeasance against the people and environment of this Great Lakes state. We are blessed to live in a place with an abundance of clean, fresh water but actions and inactions by MDEQ officials have jeopardized this. They are responsible for years of harmful contamination by wrongfully approving applications from corporate polluters and not adequately monitoring and addressing community concerns that have created fear and distrust in Michigan’s drinking water sources.”

EDWIN ROWE, Reverend, Director of the Detroit Metro Interfaith Worker Justice; Pastor Emeritus, Central United Methodist Church, Detroit, MI.
“Dr. M.L. King, Jr. is right: ‘Darkness cannot drive out darkness, only light can do that.’ While the number of acolytes is growing in number, we will keep coming until every pulpit of every faith and every leader of the faith and conscience realizes that to be silent is a betrayal not only of the people but of faith we profess.”

JAMES JUSTIN SLEDGE, Dr., Congregation T'chiyah, Detroit, MI.
“In a world hurdling increasingly towards catastrophe it becomes a moral obligation of the highest order to render asunder all laws which protect and coddle those people, corporations, and governments seeking their self-interest to the peril of all else.  Barbarism masquerading as 'law and order' stands out to me - as a Jew, philosopher, and educator - as the greatest singular inversion of the process of history as human liberation.  It is, therefore, an honor to unite with this beloved community of conscience and faith to resist the manifest evils wrought on this world by those that would would put private profit over the very possibility of a future worth living in.  That struggle belongs now, more insistently than ever, to each person, perhaps not to complete, but neither from which to desist.”

ELIZABETH THEOHARIS, Reverend, Dr., National Co-Chair, Poor People’s Campaign, New York, NY.
"In a state where 41% of the population is poor or low-income, the fight for water has revealed a wider fight around poverty, public health, privatization and a political system that preaches the myth of scarcity in the wealthiest nation in the history of the world. Dozens of us — advocates, clergy and directly impacted people — were arrested outside the doors of the department last spring during the launch of the Poor People’s Campaign 40 Days of Action but on May 9, 2019, the Ingham County prosecutor dropped all charges 'in the interest of justice.' In the interest of justice, we continue to organize in Michigan and 40 states across the country. Please join the Poor People’s Campaign: A National Call for Moral Revival (www.poorpeoplescampaign.org)"

CARLOS SANTACRUZ-CARDENAS, Organizer, Michigan Poor People’s Campaign, Detroit, MI.
“Though we celebrate this legal victory we acknowledge that this isn't enough. What we learned most from this process is how intimidating and difficult a legal battle can be. These walls of "justice" and tactics of intimidation - forcing people to plead guilty or face severe punishment - are tactics that have been used for too long to criminalize poor working class people in this country. We urge people to take their case to court and demand that they are tried by their peers. It is their right!”

LEAH WISTE, Director, Michigan Interfaith Power & Light, Detroit, MI.
“We have 20% of the Earth’s fresh surface water here in Michigan. That so many Michiganders are denied access to this basic human right -- while Nestlé pumps hundreds of millions of gallons from streams in Evart, MI for just $200 a year -- is perverse and immoral. Our lawmakers and state regulators have utterly and repeatedly failed to protect the air, land and water that the people of Michigan depend on. It’s time for them to act responsibly, to govern justly, and to put people before corporations.”

WILLIAM WYLIE-KELLERMANN, Reverend, Author, Pastor Emeritus, St Peter’s Episcopal Church, Detroit, MI.
“Our action was indeed justified and necessary. And yes, urgent. The crimes of MDEQ which we sought to expose, remain. If we’d been able to put the facts before a jury, we’d have been effectively calling on EGLE (the Department of Environment, Great Lakes, and Energy) to also stop business-as-usual. We need more than a name change, more than a bureaucratic shell game. What’s necessary is an agency that does not protect corporations from public pressure, but instead defends and protects the planet, the waters, and human life from the likes of Nestle, Enbridge, and US Ecology.”


More information:
https://www.MichiganPPC.org
Watch our Facebook page for updates during the events
Michigan Poor People’s Campaign: A National Call for Moral Revival is the Michigan Chapter of the PPC.  Initially envisioned by Dr. Martin Luther King Jr. 50 years ago just before his assassination, the Poor People’s Campaign aims to combat the “four evils” of American society: poverty, systematic racism, the war economy and environmental devastation. 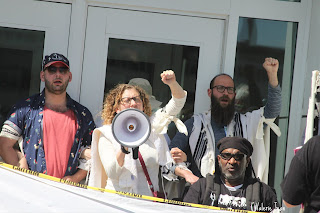 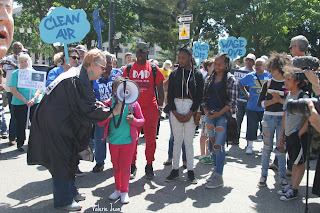 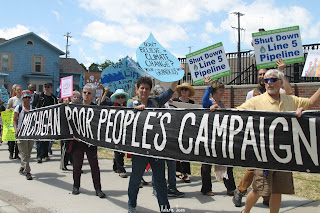