LANSING – Before their day in court, members of the Michigan Poor People’s Campaign spoke out to demand clean, safe, affordable water for all and an end to racial bigotry at the root of the water shutoffs. 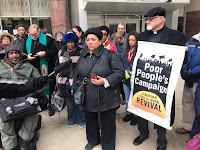 Activists highlighted their demands months ago by blocking the entrances to the Michigan Department of Environmental Quality (MDEQ). They stand by this action despite having been arrested because of the harm massive water shutoffs cause families.

“We are being prosecuted for putting our bodies on the line so thousands of mostly black and brown families can have safe, affordable water,” said Rev. Liz Theoharis, vice chair National Poor People’s Campaign. “The real crime is that those families are being forced to do without while there is a Water Affordability Plan that could allow them to pay what they can afford. Instead of blaming and shaming people with low incomes, elected officials at all levels need to embrace the win-win of affordable water for all.”

Thirty members of the Michigan Poor People’s Campaign took part in blocking entrances to the MDEQ, and about half were arrested. They are demanding a jury trial and spoke in front of Lansing 54A Court on West Michigan Avenue.

“We believe a jury of our peers will side with us and say it is legal and moral to take nonviolent action so the MDEQ does its job to protect human health and safety,” said Claire McClinton of the Flint Democracy Defense League. “We believe if the families in Flint, Detroit, and Highland Park were mostly white and affluent, we would not have to fight for their right to safe affordable water. But that’s indicative of why the Poor People’s Campaign exists, and why we are making national call for moral revival.”