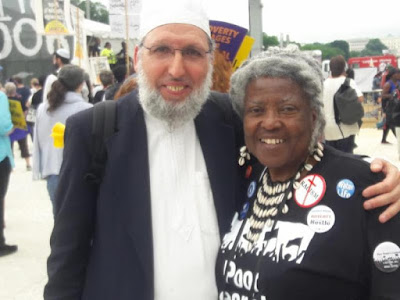 [Saturday, June 23, 2018, Washington DC] On a sad and gloomy day, people from across the United States converged at the National Mall in Washington DC to share the conditions and misery citizens of the richest country in the world suffer from. The Poor People's Campaign's (PPC) peaceful march in DC is the culmination of a 40-day protests and civil disobedience across the country in front of dozens of States' capitol protesting against poverty, militarism, systemic racism, voting rights, and ending mass incriminations among other noble causes.

Imam Mustapha Elturk of the Islamic Organization of North America (IONA) and AHRC founding board member and William Antoun, IONA's Outreach Director, joined a group of 48 people from Michigan, organized by the Michigan's PPC chapter and Michigan Coalition for Human Rights, to take part in the historic 50th anniversary of the Poor People's Campaign originated by the Rev. Dr. Martin Luther King in DC. Among the 48 people was activist Lila Cabbil aka mam Lila, a close friend of Rosa Parks.
The protest marks 50 years since "Resurrection City," when nearly 150,000 people came to the Poor People's Campaign in 1968 with many religious leaders and activists from all over the country who camped out on the National Mall for six weeks to protest against poverty, show solidarity and gain attention to their cause.

Many clergy, community leaders, and activists shared the stage to address the thousands of people assembled on the Mall. Many of the victims also related their stories and shared their sorrow and grief as a result of the government's oppression and lack of moral conscience.

The gathering was a call for action. The 50-year anniversary of the PPC marks the beginning of a "Moral uprising across America" according to the Reverend William Barber who leads the PPC movement. In his speech, he made sure that the audience understands that they were not there to celebrate an anniversary and that, "This is not a commemoration of what happened 50 years ago. This is a reenactment and re-inauguration."

Clergy from different religious backgrounds quoted social justice verses from their respective holy books. At 2:00 PM the protesters, blacks, whites, browns, young and old, were led by Rev. Barber and those who took to the stage in a march down on Independence Avenue to the U.S. Capitol and back to the National Mall. The Capitol was barricaded with police officers and security guards.

Commenting on the rally in Washington DC, Imam Elturk said, "It is a privilege for me to stand in solidarity with clergy among other people of conscience fighting for the rights of the vulnerable and poor people as well as mother earth's ecological devastation." "There are many injustices that are not being deservedly addressed by our government and mass media. Therefore, a mass popular movement such as the Poor People's Campaign, is the answer to bringing the deserved attention to the power that be," he continued. He wonders, "This is America. Why should anyone live a life of misery?"

Imam Elturk did join along with other clergy and activists the Poor People's Campaign's rally and protest at the state capital building in Lansing on May 14, the day following Mother's day, marking the first day of the 40-day protests across the country. Commenting on that event, Imam Elturk said, "It is amazing how much injustice is taking place right here in our backyard, in America, the richest and most powerful country in the world." He urged that "We, as people of conscience and people of faith, must put pressure on our government through peaceful means including civil disobedience when necessary to change the status quo." As believers, Imam Elturk believes that, "This is our calling. It is our religious and moral responsibility to support The Poor People's Campaign."

The Poor People's Campaign: A National Call for Moral Revival, originated in 1968 and organized by Martin Luther King, Jr. and the Southern Christian Leadership Conference (SCLC), and carried out under the leadership of Ralph Abernathy in the wake of King's assassination. The campaign demanded economic and human rights for poor Americans of diverse backgrounds. The revival started two years ago with reaching out to tens of thousands of Americans in more than 30 states and surveying their conditions and getting testimonies of their stories and their demands for a more just society. The surveys and studies were put together in a report titled The Souls of Poor Folk: Auditing America [1] and it reveals how the evils of systemic racism, poverty, ecological devastation, and the war economy and militarism are persistent, pervasive, and perpetuated by a distorted moral narrative that must be challenged. The campaign seeks to address all of these issues with lists of specific demands.
The Poor Peoples Campaign (PPC): A National Call for Moral Revival! Demands the following:
*           A massive overhaul of the nation's voting rights laws
*           New programs to lift up the 140 million Americans living in poverty.
*           Immediate attention to ecological devastation.
*           Measures to curb militarism and the war economy.
To learn more and get involved please visit www.poorpeoplescampaign.org
[1] https://poorpeoplescam.wpengine.com/audit/
Email ThisBlogThis!Share to TwitterShare to FacebookShare to Pinterest
Newer Post Older Post Home